I will conclude this contextual summary by answering the following questions:

Edward Thorndike was 45 years old when Intelligence and its uses was published in 1920. His experiences at that time differed greatly from that of a 45 year old United States citizen in 2015. Todays 45 year old is witnessing the 2016 presidential election race. They have lived through several previous presidential elections, as had Thorndike at that point in his life, but they have never lived through the death or an assassination of an incumbent United States president. 1 out of 5 men who became president had been assassinated during Thorndike’s first 45 years of life. The incumbent president, Barack Obama (the first Black president), has been threatened with assassination 400% more than his predecessor, however the chances of a successful assassination are lower than in 1920.

Additionally, the number of states in the Union grew from 38 to 48 during Thorndike’s life. Conversely, the United States has always had 50 states during the last 45 years. Between 1920 and 2013, the country’s population increased by 66.6%. It increased from an estimated population of 105,710,620 citizens across 48 states to an estimated population of 316,128,839 citizens across 50 states. Census race categories have also changed over time to include more groups as the percentage of Whites in the United States has decreased from 89.7% to 63.7%: 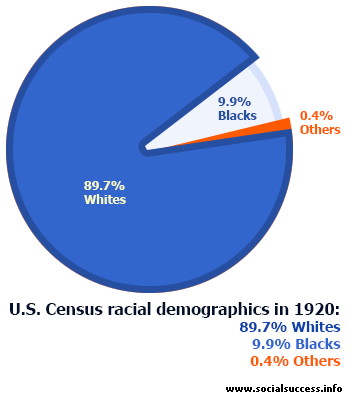 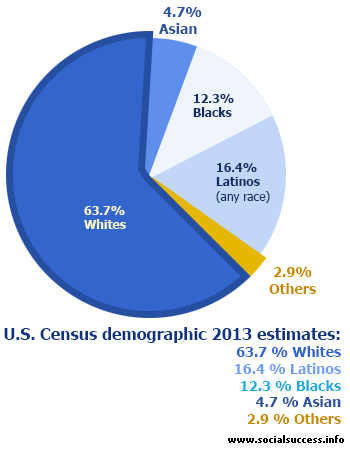 The immigrant population increased from approximately 13,920,700 in 1920 to approximately 41,348,100 in 2013. The percentage of immigrants in the country was approximately 13% in both 1920 and 2013. However, the top source countries in 1920 were in Europe and the top source countries in 2013 were in Central America and Asia. Unfortunately, anti-immigrant sentiment is now high in America. The immigration act of 1917 is now in the past, however, there are many inaccurate associations made between immigrants and crime. Presidential candidate, Donald Trump, is infamously recognized as an anti-immigration leader because of his negative public statements about Mexican immigrants. Furthermore, Muslim Americans are encountering islamophobia throughout the country. Trump is the face of the United States anti-Muslim movement and has publicly called for a "total and complete shutdown of Muslims entering the United States" in response to multiple terrorist acts and continuous threats from ISIS and Al Qaeda.

Lastly, race riots, segregation, and the immigration act of 1917 are now in the past. However, race and ethnic relations are at an extremely low point in 2015 when compared with recent history. Tension over the shooting deaths of multiple Black citizens by officers inspired the Black Lives Matter movement. Followers of this movement have used multiple tactics to bring awareness to their cause. Examples include social media posts (hashtag activism), rallies, marches, and staged die-ins where participants pretend to be dead in the streets of many cities. Moreover, the Ku Klux Klan has publicly boasted that their membership numbers have increased. In fact, Anonymous, an international network of hacktivist, exposed the identities of 1000 KKK members.

According to Census estimates, women made up approximately 50.8% of the United States population in 2013. This percentage is slightly higher than in 1920 when women made up 49.0% of the population. However, the percentage of women who were receiving academic degrees increased much more significantly and they now receive more degrees than men. 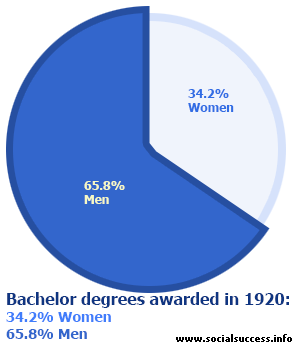 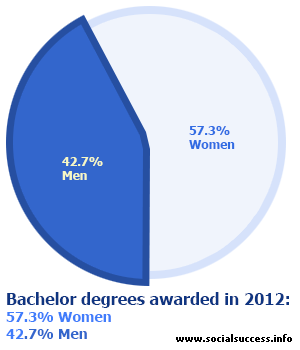 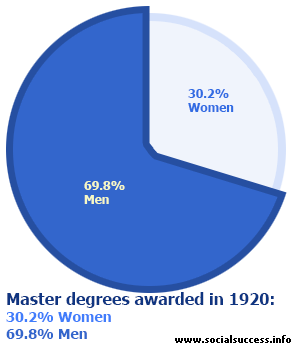 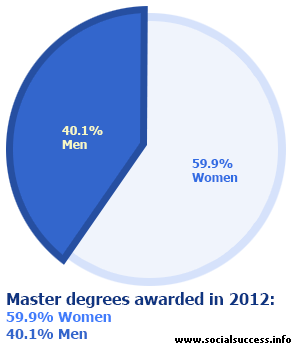 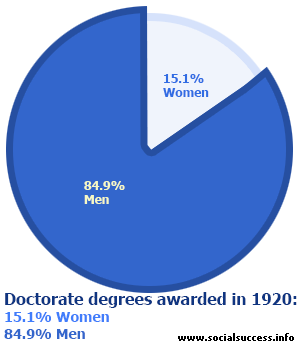 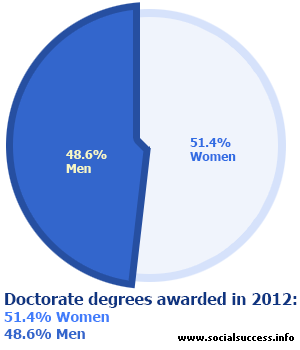 It is difficult to accurately compare the ethno-racial breakdown of conferred degrees to the ethnoracial breakdown of the United States total population because of the different methods and categories used between the different data sets. Nevertheless, the percentage of Whites with college degrees is still disproportionately higher when compared to the total United States population. The percentage of non-White college graduates has positively increased throughout the history of the United States but is lower than the overall population percentage for all non-White groups (except Asians).

Advanced educational achievement was extremely important to the Thorndike family. Edward and his brothers each earned their Ph.D.s and became professors at the University level. This drive for academic success was instilled in Edward and his siblings by their parents and he would pass that along to his four children who also received Ph.D.s during their academic careers. The legacy of academic success that he saw in his family influenced his belief that intelligence was genetic.

Edward Thorndike’s strongest academic influences were 2 heavyweight pioneers in the field of educational psychology: Harvard University’s William James and Columbia University’s James Cattell. William James taught the first psychology course in the United States and is credited with inspiring Thorndike to pursue his interest in educational psychology. He would continue to assist Thorndike with his academic career decisions long after Thorndike graduated from Harvard but he is also credited with influencing many other intellectuals such as Emile Durkheim, W. E. B. DuBois, and Edmund Husserl.

Conversely, James Cattell did not teach the first psychology course but he was the first to earn the title of psychology professor in the United States during his time as a professor at the University of Pennsylvania. Cattell helped legitimize psychology as an academic science. However, his eugenicist beliefs influenced his academic work and these views were passed on to Thorndike. Their research was often motivated by the desire to further validate eugenics. Thorndike’s beliefs in the intellectual superiority of wealthy White males was strengthened by his working relationships with William James and James Cattell because both men came from wealthy and prominent families. The eugenics movement's influence was especially strong on Thorndike because James Cattell was taught in Europe directly by the father of the eugenics movement, Francis Galton. Francis Galton created the term eugenics and is often credited as the first scientist to document a social science study about genius and greatness, Hereditary Genius.

4. How have people responded to Edward Thorndike’s ideas throughout the years since this article was first released?

Edward Thorndike established himself as a leader in the field of educational psychology. He achieved numerous career milestones on his way to helping establish educational psychology as a respected social science. He had over 500 publications during his academic career and he became one of the first psychologist to be admitted to the National Academy of Sciences in 1933.

The results of his research on intelligence exams continue to influence our society today. The tests he developed as a member of the military’s Committee on Classification of Personnel during World War I were the earliest versions of today’s Armed Services Vocational Aptitude Battery (ASVAB) exam. Today’s ASVAB exam is taken by everyone who wants to join the United States military. Additionally, Thorndike modified the army intelligence exam and proposed that it be used by Columbia University and other colleges to assess the likelihood that an applicant would succeed on the undergraduate level at their institution. His version of a college entrance exam was one of many at that time that were developed by other researchers and used before the SATs and ACTs became a national standard. Interestingly, hundreds of universities have recently dropped the SAT and ACT requirements from their applications because they no longer believe that college entrance exams are the best way to measure a student’s potential for success. Research has shown that evidence of racial bias does exist in the national SAT exams and that high school grade point averages are a much better indicator of the potential for academic success in college.

Thorndike’s legacy extends beyond intelligence assessments. His dissertation, Animal Intelligence, is considered a landmark study in psychology because it popularized the use of animal laboratories in psychological experiments. Futhermore, Thorndike strongly influenced the research of B.F. Skinner. Skinner agreed with Thorndike’s ideas of reinforcement and further developed it into his Operant Conditioning learning process theory which suggests that behavior is controlled by consequences. Thorndike’s legacy also includes the last building to be erected on the Teachers College campus, Thorndike Hall. It was established in 1973 as the site of the first comprehensive Research and Demonstration Center for the Education of Handicapped Children.

Conversely, in addition to the praise he has received for his academic accomplishments, Thorndike has also been heavily criticized. In fact, establishing the first research center for disabled children inside of Thorndike Hall is ironic because it contradicts his eugenics beliefs. It has been argued that the eugenics movement "was and continues to be the force behind discriminatory laws against persons with disabilities." Additionally, during Thorndike’s 40 years tenure as a Teachers College professor and later as the chairman of the psychology department, he taught eugenics-inspired principles to a vast number of students who would later go on to teach in classrooms throughout the United States. Biased examples from his research and his colleagues’ research pushed forward their beliefs in the superiority of the White race and the inferiority of all other races. The many literary works Thorndike published throughout his career are full of passages that spread his eugenicist agenda. For example, his 1929 book Elementary Principles of Education included the following text:

"Education, then, cannot improve the racial stock by the direct means of biological heredity, but it may do so, indirectly, by means of social inheritance. It may improve the race by teaching prospective parents to breed men, as they do plants and animals, by discovering the nature of the best stocks and by seeking to increase their fertility while decreasing the productivity of the poorest strains. To achieve this end, ideas and mores different from those now prevailing must be established since most persons still feel superstitious dread of tampering with the question who shall be born, though no other question so deeply affects the welfare of man."

His central argument was that education cannot improve the level of intelligence an individual has because of limitations that exist between the different races. Thorndike and his colleagues often argued that anytime a Black child scored higher than a White child, it was due to White blood in his ancestry. Published articles with this argument included E. B. Reuter’s 1917 article, The Superiority of the Mulatto and W. H. Pyle’s 1915 article, The Mind of the Negro Child. In 1920, W.E.B. DuBois published an editorial piece, Race Intelligence, in The Crisis refuting the scientific racism promoted by Thorndike and all other authors of articles such as these.

In conclusion, Thorndike was one of the most influential educational psychologist in American history. He was a prolific writer with over 500 publications during his career. He advanced educational research and established many scientifice methods that continue to influence the United States today. However, he also used scientific racism to support the dissemination of his eugenics beliefs throughout the United States educationcal system.

Acknowledgements:
Special thanks to Sosanya Jones, Kenny Nienhusser, and Blanca Vega for their assistance on this article.