Social Success Skills are all of the skills included when discussing individuals’ social, interpersonal, intrapersonal, and emotional intelligences. They can increase an individual’s potential for success in society. 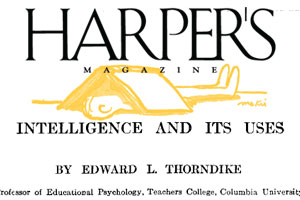 First Paragraph: In the last hundred years the civilized world has learned to trust science to teach it how to make the powers of wind and water, the energy of chemicals, and the vibrations of the ether do man's will and serve his comfort. Physical forces are being conquered by science for man. We may hope that man's own powers of intellect, character, and skills are no less amenable to understanding, control, and direction; and that in the next hundred years the world may improve as it has improved its use of earth-power.

Back Cover: Hailed by educators throughout the world, Howard Gardner's theory of multiple intelligences has been applied in hundreds of classrooms since Frames of Mind was first published in 1983. Gardner challenges the widely held notion that intelligence is a single general capacity possessed by every individual to a greater or lesser extent. Amassing a wealth of evidence, Gardner posits the existence of a number of intelligences that ultimately yield a unique cognitive profile for each person. This twentieth anniversary edition features a new introduction that explores how the theory has developed over the last decade.